Kitchen F.M, a roving pop-up kitchen in London and the south of France, serving a seasonal menu simple, modern dishes inspired by their French and Mediterranean roots, and influenced by their time in London.

After growing up in the south of France, Fabien Spagnolo and Max Truel moved to London and met in the kitchen of the Michelin-starred Pollen Street Social and later worked together at Frenchie Covent Garden.
The pair then parted ways with Spagnolo moving to the Michelin-starred kitchen at The Ninth, Fitzrovia, before becoming sous-chef at The Corner Room, and Truel working at renowned Mayfair restaurant Stem.
In 2017, they reunited to create Kitchen F.M, a roving pop-up kitchen in London and the south of France, serving a seasonal menu simple, modern dishes inspired by their French and Mediterranean roots, and influenced by their time in London. Previous residencies include the duo’s 2018 pop-up at Nest, Hackney, and more recently at Borough’s Great Guns and Crispin restaurant.

Born into the hospitality and produce industry and hailing from London, Jay Morjaria cooks his unique multi heritage and East Asian inspired food at pop ups around UK and beyond.

After working in the UK as a chef and consultant for ten years, Jay left the UK to work and train in South Korea and East Asia. His time in Korea and Japan increased his expertise in East Asian food leading to the launch of his pop up brand Dynasty dining club. Since his return to London he has cooked for the Korean Ambassador to the UK, worked with Japanese Embassy, prominent chefs and food brands as well as hosted a series of sold out and highly acclaimed supper clubs across London, UK and Asia.
Dynasty and Jay were featured on BBC2's new restaurant show, My Million Pound Menu which now available on Netflix worldwide.
He is currently developing his first restaurant, JAE, which will feature an innovative changing menu, with a focus on British seasonal produce and drawing on East Asia and Jay’s heritages for influence.

Native is the first restaurant venture of Ivan Tisdall-Downes and Imogen Davis.

Following a series of pop-ups and street food markets, Ivan and Imogen settled into their first permanent site in Neal’s Yard in 2016, before relocating to London Bridge in July 2018 following a successful crowdfunding campaign, continuing their movement towards zero waste, seasonally inspired eating.
Entirely self-taught, Ivan has completed stages at The River Cottage, and more recently at Dan Barber’s Blue Hill Farm at Stone Barns, honing his skills and developing his enthusiasm for natural, foraged and seasonal produce. Despite a long-held love of food, Ivan did not consider a career in the industry until his parents left London and he was forced to spend a summer in the countryside, where he quickly gained an appreciation for Britain’s wild produce; the joy of giving people happiness through food persuaded Ivan to turn his passion into his livelihood.
Having grown up in rural Northamptonshire, Imogen has always been at one with nature, running her family falconry business and managing the infamous Rufus the hawk. Hunter gathering is in Imogen’s blood, learning from a very young age the crafts of plucking, skinning & foraging whilst nurturing a truly wonderful palate for the wild food of Britain. Imogen was named in Grace Dents "10 People to Watch in the food industry 2017"

Ferdinand “Budgie” Montoya swapped his suit and tie for an apron and never looked back. Moving from Sydney and having worked in London from 2012, he counts his time at Restaurant Story, Dean Street Townhouse, Flat 3 and Foley’s as his biggest influences.

Sarap London was born out of a craving for chicken adobo and a means of rediscovering his Filipino roots. Centred around the mantra of authentic Filipino flavours delivered proudly inauthentically. Sarap aims to marry traditional recipes and reinterpret them with a modern and local narrative.
After 3 successful residencies, the most recent being at The Sun and 13 Cantons in Soho, Sarap will be moving to Brixton Village in Autumn for their first stand-alone site after recently winning the Brixton Kitchen competition.

Andy Stubbs, founder of Low 'N' Slow, set up his street-food business in 2013.

His Texas inspired BBQ and modern Mexican food draws inspiration from Native breed meat and seasonal British produce.
Andy has been a regular at the award winning Digbeth Dining Club in Birmingham since the start, winning the Independent Birminghams best street food award in 2019.
He has been a Meatopia resident for the last three years and is set to open his flagship restaurant later this year.

Brought up in Norfolk, Yaz has always been inspired by her coastal surroundings.

She started cooking from a young age with ingredients she foraged with her family and this passion for earthy flavours has become a big influence on her style of cooking.
Since making it to the quarter finals of Masterchef: The Professionals 2019 Yaz now heads up the kitchen at Fed & Watered, a local neighbourhood eatery in Acton, London where the produce takes centre stage.
Completely self-taught, Yaz’s style of food is unique; cutting edge and modern yet influenced by tradition.

Having spent the last 10 years working his way up the kitchen ladder in various restaurants and country pubs, Daniel now heads up the bespoke dining experience ‘Britten For Food’.

With a huge passion for local seasonal produce, Daniel's ethos is simple - let the ingredients sing. From foraging to open fire cooking it is all about championing local suppliers, making sure he delivers big bold flavours whilst creating beautiful plates of food for you to enjoy.

Having always had a mutual understanding of how exciting foraging can be, Jamie and Tasoula (ex Samling Hotel, Forest Side) embarked on their journey as Foraged Fellas.

Immersing guests in their fully interactive dining experience, the aim is to leave diners with full bellies and memories, but also with a greater understanding of foraging – whilst hopefully inspiring guests to forage themselves.

With Jamie front of house, and Tasoula in the kitchen, Foraged Fellas deliver an informal and passionate service along with delicious and beautiful food.

Working in some of London’s best kitchens, and with experience in an array of particularly Asian styles, he felt he could instead offer a brand that would excite guests with food the married up to veganism’s own worldwide sense of perspective.

alter never uses substitutes, and instead looks at cultures, dishes and techniques that are naturally vegan, bringing a wide range of exciting, and yet cohesive small plates designed for sharing.

Brought up in the popular seaside town of Whitstable in Kent, James (known as Ja by most of his friends) started eating seafood from when he was a young boy.

His love of food was passed on from his West Indian mother, who would add her own Caribbean flare to English favourites, and his Scottish father, who introduced him to the best of his heritage’s cuisine.

James honed his talents in the kitchens of the prestigious Michelin-starred restaurants The Ledbury and The Harwood Arms, where he established his own refined yet experimental cooking style. He later went on to run the kitchen at James Cochran EC3 before moving on to open his new project 1251 on Islington’s Upper Street, where Kentish produce from his hometown takes centre stage.

In 2018, James won the London & South East category of the popular BBC2 programme, 'Great British Menu' and was crowned the 'Champion of Champions' following the final banquet celebrating 70 years of the NHS.

Following their four-month residency at Hush, Mayfair; Kitycow combines the cuisines of India and Nepal with a modern British approach.

Having met at Westminster Catering College, Joe and Aaron went on to travel together in Australia working in fine dining restaurants. For their Indo-Nepali cuisine, Aaron takes influence from his Indian heritage, whilst Joe is inspired by his wife's cookery.

Sam Bryant and Alicja Specjalna (ex Coal Rooms) are the duo behind Whole Beast and are going properly primitive with their nose-to-tail concept, Whole Beast.

Using flame, smoke, ember and ash to achieve subtle variances in flavour and texture - like pyromaniac sommeliers, matching different woods to different cuts for maximum taste – the pair pride themselves on using every element of the animal to ensure that absolutely nothing is wasted. Fat, bones, offal and all. Using both of their Norfolk and Polish heritage to create menus with both provenance and frugality over live fire.

Join The Carcass Cartel for an evening of offal and off cuts, presented by some of London's most exciting chefs.

The Carcass Cartel is a revolt against waste and an initiative to highlight just how modern, approachable, uncomplicated, delicious and above all ethical nose to tail eating can be - spearheaded by some of the UK’s most exciting chefs. Alongside Head Chef Jamie Park, the Cartel will be taking over the kitchen at Adam Handlings Frog Hoxton on the 28th January for a seven course dinner focused on offal and off cuts - with dishes from:
Jamie Park (The Frog)
Sam Bryant & Alicja Specjalna (Whole Beast)
Tom Griffiths (Flank)
James Strawbridge & John Hersey (Sons of Thunder)
Dan Shearman (The WilderKitchen)
Jay Morjaria (JAE)
Ivan Tisdall-Downes & Imogen Davis (Native)

Tickets include a welcome drink from Renegade Urban Winery

Ex-MasterChef: The Professionals Adam Handling, Sven-Hanson Britt and Michelle Trusselle collaboration dinner
After competing together on MasterChef: The Professionals, Rematch in December 2019, Adam Handling, Sven-Hanson Britt and Michelle Trusselle have decided to join together for an exclusive 6-course collaboration menu.
There are only a few tables left for the 17th of January, click on the link below for more info on the chefs, the menu and to buy your ticket.

If you have any questions please email [email protected] 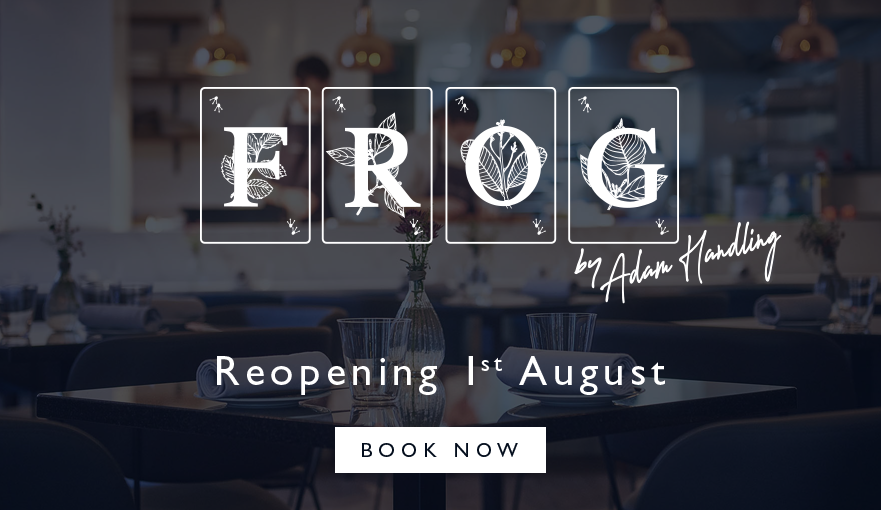